ON YOUR PERSONALIZED
GREETING CARD ORDER 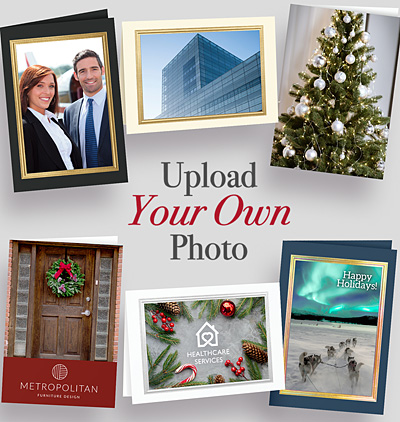 Upload Your Own Photo
Greeting Cards

This holiday season delight your loved ones by sending visually stunning San Francisco Christmas cards. The beautiful city-by-the-bay shines in these spectacular cards which are showcased on our premium quality card stock and framed by an embossed foil border.

San Francisco, California has become one of the most recognizable cities in America, due in large part to its striking architecture and dazzling feats of engineering. One such example of these is the Golden Gate Bridge, which the American Society of Engineers deemed a “modern wonder of the world”. A close-up of the bridge, with the San Francisco skyline in the background, is truly a wonder to behold. Who wouldn’t enjoy receiving a holiday card featuring the city of San Francisco?

The Golden Gate Bridge is just one of San Francisco’s beautiful bridges. The Bay Bridge, which connects San Francisco to nearby Oakland, is equally impressive, adding to the city’s wondrous architecture. Whether at twilight with the setting sun, or in the early morning sunshine, the Bay Bridge stands majestically in San Francisco Bay, welcoming you to the city.

San Francisco’s city scene shimmers in the nighttime, as one of our cards boasts the beautiful skyline aglow at nightfall. The twinkling Transamerica Building shines above the city like a star at Christmastime.

Fans of television and movies alike will enjoy our Seven Beauties Christmas card, as these colorful Victorian homes have become a San Francisco staple and popular attraction to the city. The beauty of these classic homes is further accentuated by the rising skyscrapers of San Francisco’s skyline behind them.

Whichever one of our San Francisco Christmas cards you choose, you will be sending the joy and wonder of a city steeped in history and renowned for its style.

Upload Your Own Card Options

Upload your photo
or image to one of our
predesigned cards!

and upload your
completed card design!

Are you sure you want to do this?

Your request has been received and will be sent out within 24 hours via First Class Mail. If you need to receive your samples faster or have any other questions, please call us at 1-800-950-7064.

You have added [[sampleSkus.length]] of 6 free samples. Click "View Sample Cart" to provide your shipping information and submit your request.

You have already chosen 6 samples. Click "View Sample Cart" to change your selections or submit your request.

Step 1: Choose sample designs you would like to receive.

You have entered some invalid item numbers.

The design number you have entered is sold out.

Sorry, we are unable to process this sample online. Please contact us at ​service@gallerycollection.com to request your sample.

Click "Request Sample" on the design's page (or type the Design #).

Items marked with an (*) are required fields

Thank you for signing up for our e-mail Program!

We see you have already joined
our Email Program at this email address.


Thank you for your interest in
GalleryCollection.com!

We're sorry, your browser is out of date and does not work well with our website. Please upgrade your browser to the latest version or if you would like us to help you with your order please call 1-800-950-7064.

Receive cards in 5 Business Days with Next Day Air!
Order by Midnight Tonight ET to receive your holiday cards by Thursday 12/16.

Order by Midnight Tonight ET, Receive
by Thursday, 12/16 with Next Day Air