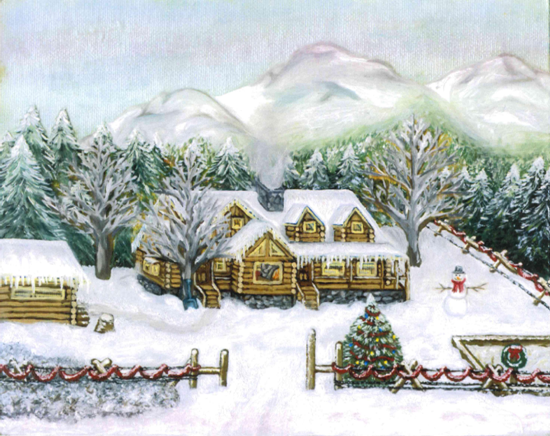 In our first installment of the 2010 Scholarship Contest Look Back Series, we wanted to give you a behind the scenes look into the very interesting and creative idea behind 2010 Scholarship Winner Dawnee Burson’s winning entry.

As Dawnee explained it in her letter that she submitted along with the entry, “I wanted to do a Christmas calendar card with four layers, one for each season that could be pulled off the front of the card as the seasons change”.

In order to accomplish this, Dawnee started with a base farm scene illustrating the fall season. She then provided us with acetate overlays (sheet of clear plastic laid over a background) which depicted different seasons for the same farm scene. Each overlay would have its own painted details which we would then use to lay on top of the base painting in order to change the seasons. In the slideshow below, you can look through Dawnee’s interpretation of the four seasons. Look at the differences in the details between each version from tire swings in the summer version to a scarecrow in the fall version. We think Dawnee came up with an amazingly creative way to show off different seasons all while using the same painting as the base!

Below is the summer overlay which Dawnee provided. As you can see, the empty areas allow for the details from the original painting such as the mountains and forest to show through while also being overlaid with the new additions such as the tire swing and roof.

We hope you enjoyed this behind the scenes look into just how creative Dawnee’s winning entry really was. We hope you come back next week as we continue to reveal even more about the 2010 Scholarship Contest!