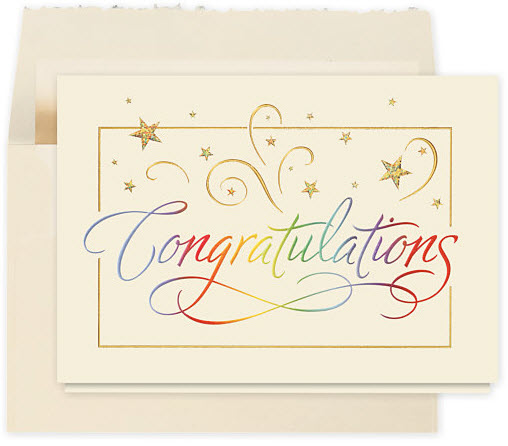 Remember when we were kids how excited we’d get if someone took the time to tell us we did a really great job on something? I can remember getting one of those handmade “Well Done” certificates that stayed on my fridge for what seemed like forever. In fact, I can remember my kids getting a far more technologically advanced version of the same thing. Well, why do we have to be a kid to get something like that? Who wouldn’t appreciate Congratulations cards that recognize your hard work?

Recently I was involved in a town wide event sponsored by our local Chamber to get people out tasting foods from several new restaurants. While I enjoyed all the running around and organizing – since I’ve been told I can be a control freak – it was tons of work. Especially since it was all done while still holding down a full time job and a family life.

When the day finally arrived, everything fell into place and I have to admit, it was a gigantic success. We made a ton of money and people got to try new foods and hopefully found some new favorite places to eat. When I got home at the end of the night, I found the most beautiful card on the kitchen table that said “Congratulations on a Job Well Done”. The card, and the accompanying flowers, was from my husband and kids. It brought tears to my eyes to know that they acknowledged and appreciated all the time I put into something I really wanted to be a part of.

The next day, I got several other cards and texts with the same message. What a great feeling it was to know that everyone had a great time and realized the effort it took on the part of many people to make that happen. I guess it doesn’t matter how old you are or how often you hear it, it makes you feel good to be recognized for a job you put your heart into.

When getting together with my friends, the conversation always seems to turn to the workplace. So many of them are not happy with their current working situations.  Oddly enough, the complaints are not only about their salaries. They all seem to have low morale.  I think I have devised an easy way to boost their morale and self-esteem in the work place; send them congratulations cards!

Years ago, I was a manager at a very large hotel.  When you work with such a large group of people sometimes some of these people slip through the cracks.  I had a policy of sending out business congratulations cards.  The cards could be sent out for many reasons. I tried to send a card for small accomplishments as well as for milestones.  Some of the reasons I sent cards were for a promotion, a raise, someone got employee of the month, someone received a complementary letter from a guest.  The card that seems most appreciated was for a job well done.  As they opened the card, their faces would light up.  All it took was a little recognition.

Congratulations cards are a small way that you can make a big difference in office morale. It’s something that all my friends and I agree on!

I remember years ago when I worked as an employee for a sporting goods chain. One of the nice things working for the folks who ran that company was their acknowledging of both my birthday and company anniversary with the presentation of very nice congratulations cards. Now that I am a member of a corporate executive team, I make absolutely sure that my employees always receive business congratulations cards to commemorate special occasions in their lives.

The one I picked out for this year is Design 644AR – Congratulations Banner Greeting Card. This is a fun and colorful design that says exactly what I want to say in a most cheerful and happy way. The design depicts a banner across the top of the card that reads, ”Congratulations from all of us!”, with the lettering in all different colors ranging from blue and green to red and gold.

Below are four people – two men and two women (the same makeup as our executive group) – with big smiles on their faces, holding multi-colored balloons and standing in a large, opened gift box. Multi-colored streamers and confetti lend an accent as a final touch.

I have yet to see a more joyful and pleasing business congratulations card to give to a valued employee! Design 644AR – Congratulations Banner Greeting Card really fits the bill!

Design #899AY- Bursting Congratulations Wishes, is the perfect business congratulations card for when you’d like to compliment someone on that big promotion, tell a co-worker congratulations on a job well done, or surprise a business associate that’s celebrating a monumental anniversary with the company. This attention grabbing design is sure to convey your sentiments exactly.

This stunning card is printed on black matted stock paper inside and out, and the embossed design on the front shows a gold foil box with gold tone on tone slanted stripes that run across the front of the box. Rich foil colored balloons in gold & bright orange burst forth from the box mixing twinkling stars & gold dust in reflective foil amongst the balloons. To top off the grand finale of the design you have the words “Congratulations” in large script font scrolled above the balloons in the same reflective gold foil you see throughout the design.

This exquisite congratulations card can easily be used for any business or personal milestone in life. The recipient who opens this card is sure to know how truly appreciated they are!

Design #104AY, Stellar Congratulations Greeting Card, truly reflects its name. This business congratulations card features a cream matte background with the words “Congratulations” in a script font that moves in a circular pattern towards the center of the design. The sentiment appears in two separate areas of the card, one near the top in rainbow foil and one near the bottom of the card in a solid icy blue foil. Along with the words, there are embossed dots and stars that also form into the same circular infinity pattern that sweeps across the entire front of the design.

The prominent color of the design pattern starts out as an icy blue foil but as the stars, dots, and sentiment swirl towards the center, they change into bold rainbow foil that appears slightly different on each card design. The size of the stars and dots start out large but as they swirl towards the center of the card the embossed pattern get smaller in size, giving it an infinity look. Once the pattern reaches the center, there’s a bold solid colored foil star that adds more to the infinite depth of the design. This business congratulations card is the perfect card for business or personal usage, to show expression of joy, success, good fortune, a job well done, promotion, receiving an award, anniversary or any personal milestone in your recipient’s life. The reasons to send this card are endless, making this elegant design appealing to all.

Upon a recent promotion, I received several greeting cards with well-wishes from co-workers. My boss gave me a business congratulations card and on the inside wrote “Congrats…or should I say God bless you?” I guess you are wondering what sort of inside joke this could possibly be, right? Let me backtrack.

It all started with a sneeze. It’s pretty much a given that if someone sneezes, they will get a “God bless you” in response. Inquisitive beings that we are, a few of us wondered how God’s blessings became the response of choice to a loud, germy sneeze. Of course to find out…we “Googled” it.

I don’t know about you, but I can’t remember what I did before Google. Have a question about something? Google it. Need to look up a factoid or rumor? Google it. None of the other search engines made it into a verb in our daily conversations. I only wish it had been around when I was a kid. It would’ve been so much easier to Google something than ask Mom to drive me to the library so I could look it up in an encyclopedia.

In any case, Google made good on its informational uses. It turns out that back in plague times, the Pope made it a law that you should bless someone in case the sneeze was a precursor to an untimely, plague-related death. Prior to those times, if someone sneezed, they were congratulated for getting rid of an evil sprit!

Some of us have started to congratulate our colleagues when sneezing. Sure, we get odd stares at first, but when we explain the origin, the stares stop (well, usually). Our Congratulations Movement has yet to pick up steam, but I am determined to make it catch on, even if it means bribing with days off! (Ok, maybe not. Bribery is not the best way to go about things, folks.)

If you have particularly sneezy friends or co-workers, and are tired of blessing them every time they let out a big one, think about handing them congratulations cards. Include a tissue, and maybe an explanation of why you’re congratulating them. That should save you from having to react to the sneezes at all for a very long time!

In the business world, congratulations are often rare while negative comments are more common. Every once in a while, I ask myself “Why do you stay at this job?” when my hard work seemingly goes unnoticed. I mean, I don’t want flowers or gifts, nor do I expect a raise every time I achieve something at the office. But it would be nice to receive business congratulations cards for my better efforts. Small gestures can mean a lot.

Other companies give congratulations cards to their employees. I know this because my cousin flaunts her corporate greeting cards every time she gets one from her boss. She keeps the greeting cards in a scrapbook for Pete’s sake! Obviously, receiving these greeting cards gives her a sense of pride.

The last time I hinted to my boss that there was such a thing as business congratulations cards, he looked at me as if I had two heads. I persevered, however, adding that my cousin had a whole collection of business greeting cards that were given to her by her supervisor and that she confided to me that she works a little harder each time she gets a greeting card. OK, maybe that last statement was a slight exaggeration.

Well, needless to say, when I had an important company inventory report completed a week before it was due, I was totally blown away when I found two greeting cards on my desk. Were they congratulations cards? You bet they were! One was from my boss and another from our production manager. When I thanked my boss for the greeting card, he smiled and said, “I am glad you like my idea!”

I held my tongue because it really didn’t matter that the idea for business congratulations cards was mine. What mattered was that I could now buy a scrapbook for my own collection of greeting cards. Maybe I’ll display all of my employee birthday cards in this scrapbook too!